“As you guys might expect, this is my last home game,” Dirk Nowitzki told the standing room only audience at American Airlines Center on Tuesday, April 9, 2019. And with that, the face of the Dallas Mavericks franchise retired from the only team he has known after a record-setting 21 seasons.

Nowitzki made the announcement following the Mavs’ 120–109 win over the Suns in Dallas; a game in which the 40-year-old scored 30 points and grabbed eight rebounds and in which fans stood for most, cheering on their beloved Dirk.

Despite the impromptu farewells at different locations as the Mavs traveled this season, Dirk was never really clear about his intentions: would he retire or would he give it another go? Nowitzki, the ninth pick in the 1998 NBA draft, said his final decision to retire was made a few days before what turned out to be his last home game.

After talking with family and friends, he knew the end was here. “It’s been a long time coming,” Nowitzki said. “I think I was struggling this year with my (injured) foot–that’s no secret. It’s just not being where it needs to be to compete at a high level for 82 games. “I had a lot of treatment throughout the season—injections. But it doesn’t make any sense anymore to do that for another season, even though I would love to be there.” Owner Mark Cuban and the Dallas Mavs organization put together a spectacular going-away ceremony for Nowitzki with tributes–many of which brought him to tears–fireworks, and more. 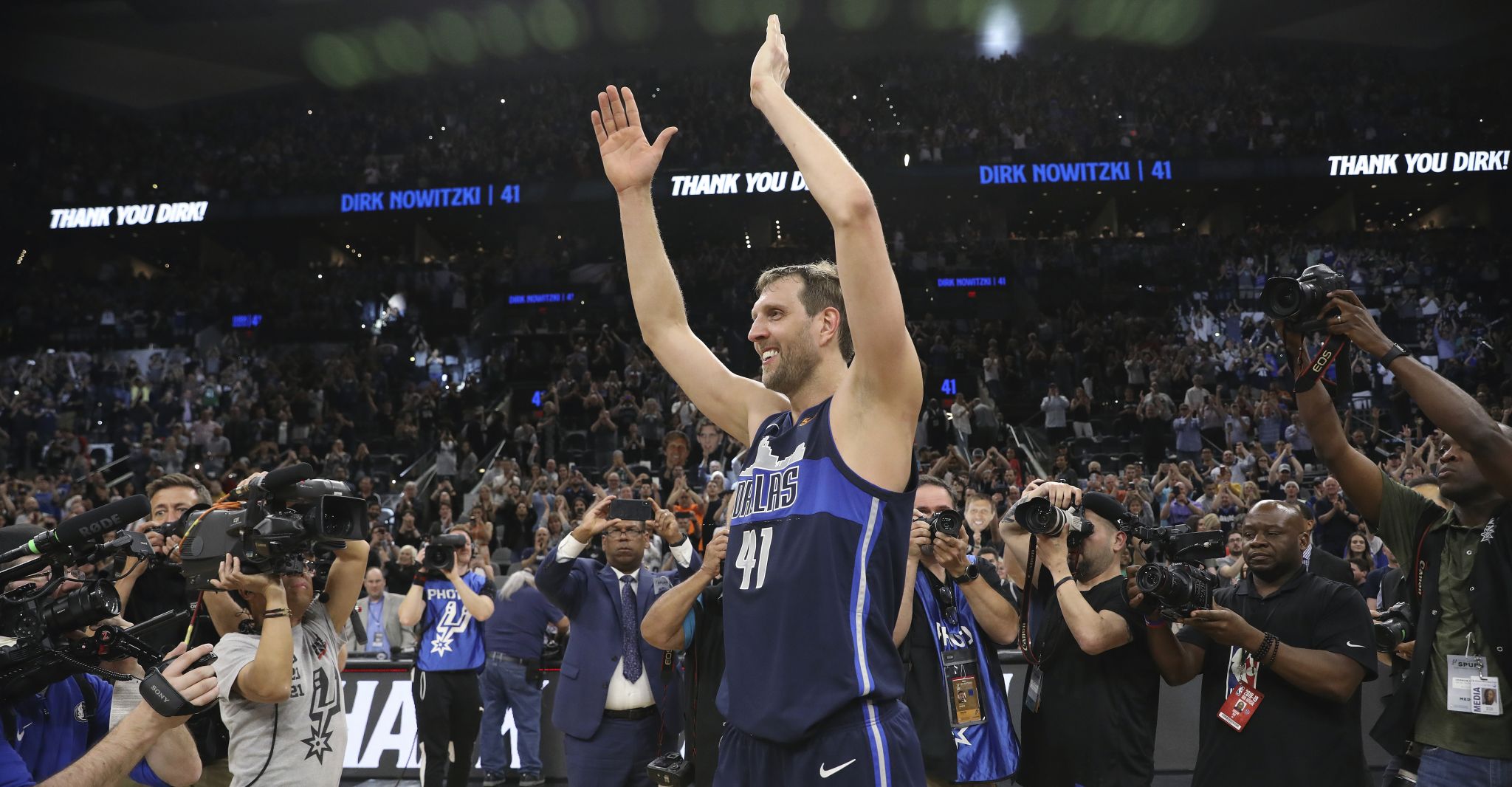 But the biggest surprise came when NBA legends Charles Barkley, Scottie Pippen, Larry Bird, Shawn Kemp and Detlef Schrempf surprised Nowitzki by strolling onto the court for the post-game celebration.

Only minutes earlier, a tribute video played on the AAC’s jumbotron with Dirk sharing his five favorite NBA players–Barkley, Pippen, Bird, Kemp and Schrempf. “I really had no idea what to expect,” Nowitzki said. “I knew obviously there was a celebration going on after the game, but they got me with the five guys coming out. “I figured there would be some videos, and then I looked up there (at the jumbotron) and they’re showing how I talked about these guys and I’m like, “Why are we doing this right now?

Then I looked around the corner and I see Charles coming out first. That was an emotional moment when I saw all five of them. I was shocked, really.” Nowitzki, speaking with reporters after the festivities, said he would have loved to return to work with some of the faces on the roster, including rookie sensation Luka Doncic and Kristaps Porzingis but it just wasn’t realistic.

“I would love to be for KP and Luka and all these young guys and have fun with them and mentor them again if I can,” Nowitzki said. “But it just doesn’t make any sense any more physically. “I think mentally I can still do it. I always push myself to work out and work hard. But physically, the push is not quite there.”

Head Coach Rick Carlisle said that night that Nowitzki retiring, “hasn’t hit me yet….It will (sink in) in time,” Carlisle said. “I believe this is a situation where you have a man who has all of these human qualities. He is humble, he is kind, he is great, he is a competitor, and he has been a guy who is too easy to take for granted. It will never be the same without him. It just won’t.”

Crown Act Passed by the House of Representatives